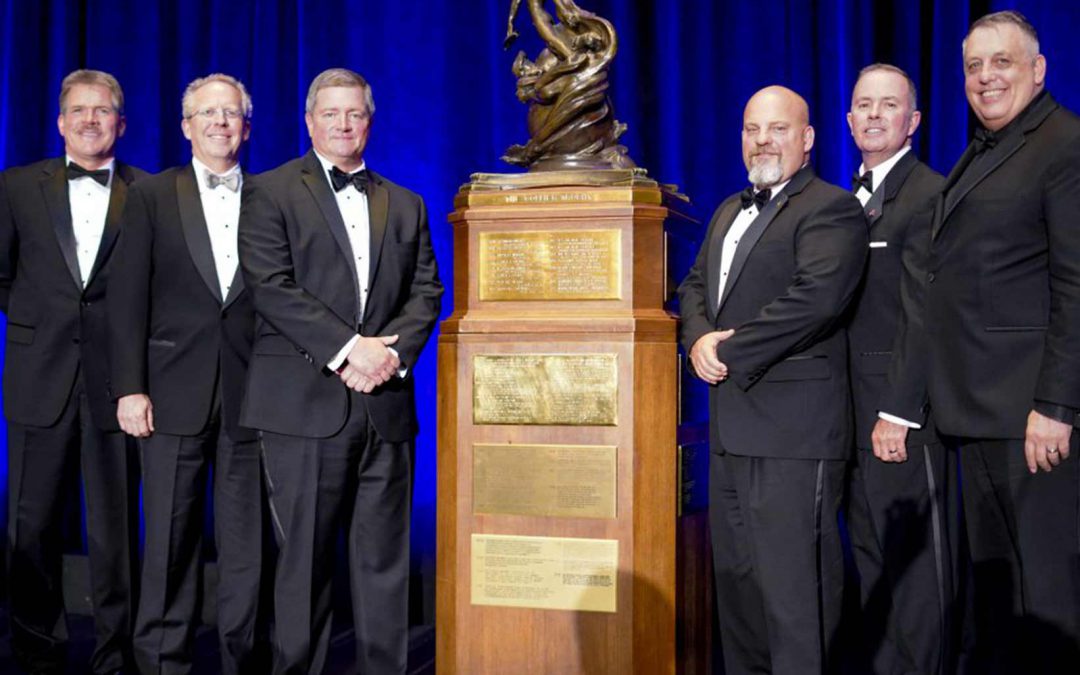 The Robert J. Collier Trophy is a highly distinguished annual award recognizing “the greatest achievement in aeronautics or astronautics in America with respect to improving the performance, efficiency, and safety of air or space vehicles, the value of which has been thoroughly demonstrated by actual use during the preceding year.” Past awardees include Orville Wright, Chuck Yeager, the Mercury Seven Astronauts, and Dick Rutan. The trophy is on permanent display at the Smithsonian’s National Air and Space Museum in Washington, DC.

Controlled Flight into Terrain, more commonly called CFIT, is the leading killer in fighter aviation. CFIT can be caused by target fixation, distraction, g-induced loss of consciousness, or spatial disorientation. AGCAS prevents CFIT through complex algorithms and a digital terrain database. When the system determines a crash is imminent, it takes control of the aircraft, rolls to wings level, and begins a 5g pull until terrain is cleared. By 2010, the team had developed and successfully flight-tested an AGCAS for the F-16 and the USAF decided to field the system on its 600-jet, Block 40/50 F-16 fleet.

Since going operational in 2014, the F-16 AGCAS has been credited with saving seven aircraft and eight pilots.  Taking note, the F-35 community followed suit and elected to accelerate AGCAS fielding on the Lightning.  In 10 months, the AGCAS was flying and was nearly flawless in flight test.

DCS, and its subsidiary IST, offer advanced technology and management solutions to Government agencies in the DoD and national security sector. The transformative ideas, commitment to quality and entrepreneurial spirit that characterize our 1,400 employee-owners allow DCS to ensure the success of each client’s mission and actively contribute to the well-being of the Nation. For more information about DCS please visit: https://www.dcscorp.com.